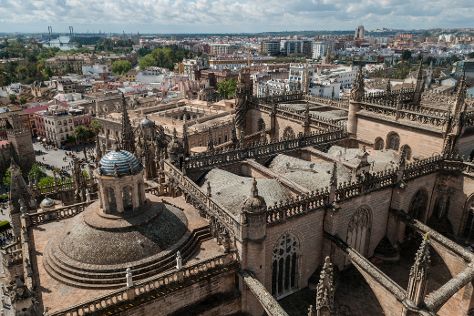 For maps, other places to visit, and other tourist information, go to the Seville trip tool.

Paphos, Cyprus to Seville is an approximately 12.5- hour flight. You can also do a combination of flight and train. You'll gain 1 hour traveling from Paphos to Seville due to the time zone difference. Expect slightly colder temperatures when traveling from Paphos in November; daily highs in Seville reach 22°C and lows reach 11°C. Cap off your sightseeing on the 25th (Mon) early enough to catch the train to Cordoba.
more less

Start off your visit on the 25th (Mon): don't miss a visit to Historic Centre of Cordoba, wander the streets of Jewish Quarter (Juderia), then snap pictures at Roman Bridge, then take in the spiritual surroundings of Mezquita Cathedral de Cordoba, and finally appreciate the extensive heritage of Calleja del Panuelo.

To find traveler tips, where to stay, and more tourist information, use the Cordoba trip site.

You can take a train from Seville to Cordoba in an hour. Alternatively, you can drive; or take a bus. Traveling from Seville in November, Cordoba is little chillier at night with lows of 8°C. Wrap up your sightseeing on the 26th (Tue) early enough to take a train to Ronda.
more less

Start off your visit on the 26th (Tue): wander the streets of Old City, then take some stellar pictures from Mirador de Aldehuela, then explore the stunning scenery at El Tajo de Ronda, and finally take in the views from Puente Nuevo.

To find reviews and tourist information, you can read our Ronda online journey planner.

Getting from Cordoba to Ronda by train takes about 2 hours. Other options: drive. In November, daily temperatures in Ronda can reach 22°C, while at night they dip to 10°C. Wrap up your sightseeing on the 27th (Wed) early enough to drive to Granada.
more less

Start off your visit on the 27th (Wed): test your problem-solving skills at popular escape rooms, then take in nature's colorful creations at Generalife, and then step into the grandiose world of Alhambra. Here are some ideas for day two: get to know the fascinating history of Mirador de San Nicolas, then contemplate in the serene atmosphere at Royal Chapel of Granada, and then look and learn at Science Park (Parque de las Ciencias).

To see other places to visit, where to stay, more things to do, and more tourist information, you can read our Granada itinerary builder tool.

Drive from Ronda to Granada in 2.5 hours. Alternatively, you can take a train; or take a bus. Traveling from Ronda in November, expect Granada to be little chillier, temps between 19°C and 6°C. Finish your sightseeing early on the 29th (Fri) to allow enough time to drive to Malaga.
more less

On the 29th (Fri), make a trip to Balcony of Europe, then admire the masterpieces at Museo Picasso Malaga, then delve into the distant past at Teatro Romano, and finally get engrossed in the history at Alcazaba.

To find ratings, other places to visit, where to stay, and other tourist information, go to the Malaga tour itinerary planner.

Traveling by car from Granada to Malaga takes 2 hours. Alternatively, you can take a bus; or take a train. In November, Malaga is a bit warmer than Granada - with highs of 24°C and lows of 13°C. On the 30th (Sat), wrap the sightseeing up by early afternoon so you can travel back home.
more less

Balcony of Europe
Find places to stay Nov 29 — 30:
Hotels on TripAdvisor
Homes on Airbnb
Highlights from your plan