On the 16th (Fri), steep yourself in history at Alhambra.

For reviews, other places to visit, maps, and tourist information, read our Granada trip site.

On the 17th (Sat), contemplate the long history of Royal Alcázar of Seville, steep yourself in history at Plaza de España, then take in nature's colorful creations at Casa de Pilatos, then admire the striking features of Torre Giralda, and finally take in the architecture and atmosphere at Catedral de Sevilla.

For maps, reviews, photos, and other tourist information, read our Seville visit website.

You can drive from Granada to Seville in 3 hours. Other options are to take a bus; or take a train. In June, daily temperatures in Seville can reach 35°C, while at night they dip to 20°C. Finish your sightseeing early on the 18th (Sun) to allow enough time to travel to Barcelona.
more less

For more things to do, ratings, maps, and tourist information, you can read our Barcelona online trip maker.

You can fly from Seville to Barcelona in 3.5 hours. Other options are to do a combination of train and flight; or drive. Traveling from Seville in June, you will find days in Barcelona are little chillier (30°C), and nights are about the same (22°C). Finish your sightseeing early on the 19th (Mon) so you can travel to Valencia.
more less 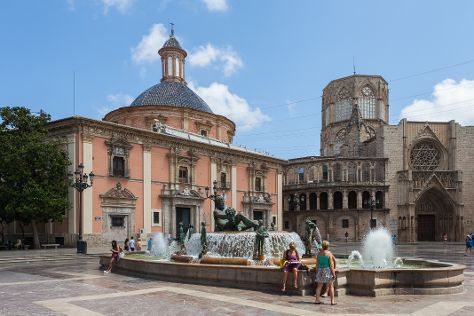 On the 19th (Mon), get to know the fascinating history of Plaza de la Virgen and then steep yourself in history at Valencia Cathedral.

For other places to visit, where to stay, ratings, and other tourist information, read Valencia trip planner.

You can fly from Barcelona to Valencia in 3 hours. Alternatively, you can take a train; or drive. In June, daytime highs in Valencia are 34°C, while nighttime lows are 20°C. Wrap up your sightseeing on the 19th (Mon) to allow time to take a train to Madrid.
more less

Kick off your visit on the 20th (Tue): hunt for treasures at Mercado San Miguel and then steep yourself in history at Royal Palace of Madrid.

To find traveler tips, other places to visit, maps, and other tourist information, go to the Madrid online road trip planner.

You can take a train from Valencia to Madrid in 2 hours. Other options are to fly; or drive. In June, plan for daily highs up to 36°C, and evening lows to 19°C. Finish up your sightseeing early on the 20th (Tue) so you can travel back home.
more less