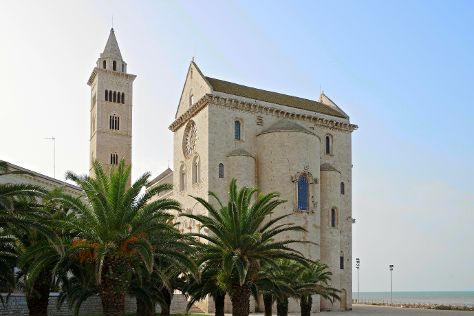 ©
Trani is a seaport of Apulia, in southern Italy, on the Adriatic Sea, 40km by railway West-Northwest of Bari. Kick off your visit on the 12th (Sat): examine the collection at La Cantina Frrud - Museo del Vino, contemplate the long history of Castel del Monte, and then see the interesting displays at Museo del Confetto Mucci Giovanni. Here are some ideas for day two: contemplate in the serene atmosphere at Basilica San Nicola, then take in the architecture and atmosphere at Chiesa di San Vito, and then pause for some serene contemplation at Cattedrale di Trani.

To find where to stay, traveler tips, photos, and more tourist information, use the Trani online trip planner.

Paris, France to Trani is an approximately 7-hour flight. You can also take a train; or drive. Traveling from Paris in September, expect Trani to be a bit warmer, temps between 32°C and 18°C. Finish your sightseeing early on the 13th (Sun) so you can drive to Polignano a Mare.
more less

Things to do in Trani

©
Polignano a Mare is a town and comune in the Metropolitan City of Bari, Apulia, southern Italy, located on the Adriatic Sea. Start off your visit on the 14th (Mon): make a trip to Centro Storico di Polignano a Mare, make a trip to Statua di Domenico Modugno, then experience the excitement of Zoosafari, and finally get engrossed in the history at Masseria Brancati. Keep things going the next day: do a tasting at I Pastini, admire the striking features of I Trulli di Alberobello - World Heritage Site, and then Head underground at Grotte di Castellana.

You can plan Polignano a Mare trip in no time by asking Inspirock to help create your itinerary.

Drive from Trani to Polignano a Mare in 1.5 hours. Alternatively, you can take a train; or take a bus. Expect a daytime high around 29°C in September, and nighttime lows around 17°C. Wrap up your sightseeing on the 15th (Tue) to allow time to drive to Lecce.
more less

Things to do in Polignano a Mare

Get out of town with these interesting Lecce side-trips: Lido Punta della Suina (in Gallipoli), Circolo Ippico Malepezza (in Sant'Andrea) and Otranto (Castello Aragonese Otranto & Centro Storico Otranto). Next up on the itinerary: don't miss a visit to Centro Storico, Lecce, take in the architecture and atmosphere at Duomo di Lecce, look for gifts at iContadini, and get outside with Maldive del Salento Pescoluse.

Drive from Polignano a Mare to Lecce in 1.5 hours. Alternatively, you can take a train; or take a bus. Expect a daytime high around 32°C in September, and nighttime lows around 19°C. Wrap up your sightseeing on the 18th (Fri) to allow time to travel back home.
more less