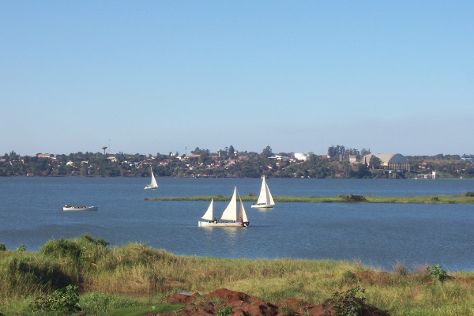 Pearl of the South

Encarnacion offers a good selection of cultural and natural attractions.

Start off your visit on the 13th (Mon): delve into the distant past at Ruinas de Jesús, get to know the fascinating history of Costanera de la Ciudad de Encarnacion Paraguay, and then kick back and relax at San Jose Beach.

Resistencia, Argentina to Encarnacion is an approximately 5.5-hour car ride. Traveling from Resistencia to Encarnacion, you'll gain 1 hour due to the time zone difference. In January in Encarnacion, expect temperatures between 38°C during the day and 24°C at night. Finish your sightseeing early on the 13th (Mon) to allow enough time to drive to Paraguari.
more less

Things to do in Encarnacion

©
Paraguarí is a city, distrito and capital of Paraguarí Department in Paraguay, located 66 km from the country’s capital, Asunción. Your day by day itinerary now includes Eco Reserva Mbatovi. Kick off your visit on the 14th (Tue): identify plant and animal life at Eco Reserva Mbatovi.

Drive from Encarnacion to Paraguari in 5 hours. Alternatively, you can take a bus. Expect a daytime high around 39°C in January, and nighttime lows around 27°C. Finish your sightseeing early on the 14th (Tue) so you can drive to Asuncion.
more less

Things to do in Paraguari

Paraguay's capital and economic center, Asuncion ranks among the youngest cities on the continent, with more than half of its residents under 30 years of age.

Kick off your visit on the 15th (Wed): get a sense of history and politics at Banco Nacional de Fomento, get a sense of history and politics at Palacio de López, then pause for some photo ops at The National Pantheon of Heroes and Oratory of the Virgin Our Lady Saint Mary of the Asuncion, and finally get engrossed in the history at Casa de la Independencia. Here are some ideas for day two: get a taste of the local shopping with Shopping del Sol, then don't miss a visit to Plaza de las Americas, then make a trip to Costanera de Asuncion, and finally take in the architecture and atmosphere at Catedral de Nuestra Senora de la Asuncion.

To find reviews, more things to do, other places to visit, and other tourist information, read Asuncion itinerary planning website.

Traveling by car from Paraguari to Asuncion takes an hour. Alternatively, you can take a bus. Expect a daytime high around 39°C in January, and nighttime lows around 27°C. Cap off your sightseeing on the 16th (Thu) early enough to travel back home.
more less

Things to do in Asuncion