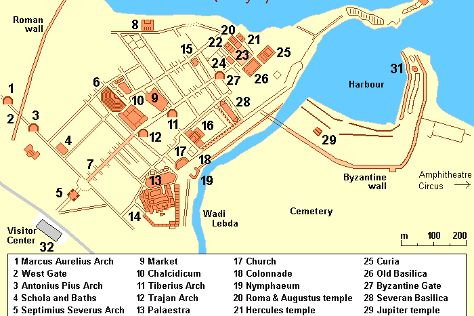 ©
Al Khums or Khoms District was a district of Libya from 1983 to 1995. Al Khums is known for historic sites. Your plan includes some of its best attractions: delve into the distant past at Leptis Magna.

To find where to stay, more things to do, ratings, and other tourist information, refer to the Al Khums holiday planner.

Tripoli to Al Khums is an approximately 2- hour car ride. In April in Al Khums, expect temperatures between 74°F during the day and 60°F at night. You will leave for Benghazi on the 5th (Sun).
more less

Things to do in Al Khums 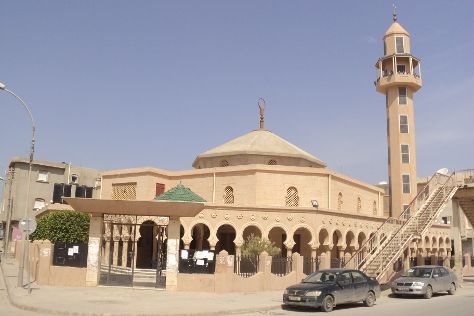 ©
Benghazi is the second most populous city in Libya and the largest in Cyrenaica.A port on the Mediterranean Sea in the Kingdom of Libya, Benghazi had joint-capital status alongside Tripoli, possibly because the King and the Senussi royal family were associated with Cyrenaica rather than Tripolitania. On the 5th (Sun), take in the awesome beauty at Jebel Akhdar. Get ready for a full day of sightseeing on the 6th (Mon): take in the architecture and atmosphere at Benghazi Cathedral, then contemplate in the serene atmosphere at Omar Al-Mukhtar Mosque, then contemplate in the serene atmosphere at Atiq Mosque, and finally contemplate the long history of Ptolemais.

For ratings, where to stay, maps, and other tourist information, go to the Benghazi travel route builder tool.

Traveling by combination of car and flight from Al Khums to Benghazi takes 3 hours. Alternatively, you can drive. In April in Benghazi, expect temperatures between 78°F during the day and 58°F at night. Wrap up your sightseeing on the 7th (Tue) to allow time to drive to Al Bayda.
more less

Things to do in Benghazi 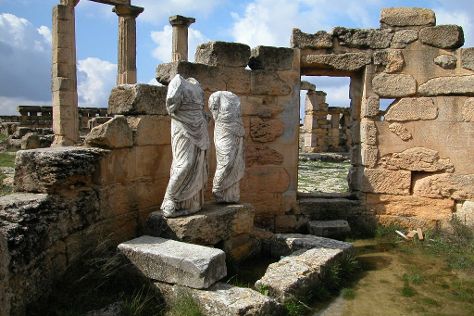 ©
Bayda, or Elbeida , is a commercial and industrial city in eastern Libya. Popular historic sites such as Darnah and City of Cyrene are in your itinerary.

To see maps, where to stay, ratings, and more tourist information, use the Al Bayda journey planner.

You can drive from Benghazi to Al Bayda in 3 hours. You'll set off for Awjilah on the 10th (Fri).
more less

Things to do in Al Bayda 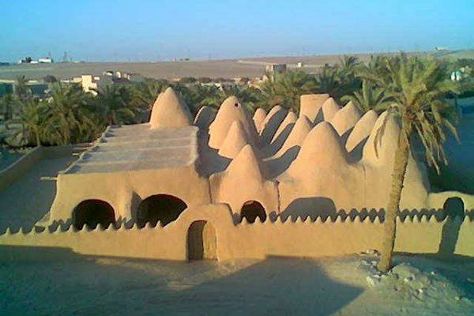 ©
Awjila is an oasis town in the Al Wahat District in the Cyrenaica region of northeastern Libya. Your day-by-day itinerary now includes Atiq Mosque.

Ask Inspirock to suggest an itinerary and make planning a trip to Awjilah fast, fun, and easy.

Traveling by car from Al Bayda to Awjilah takes 8.5 hours. You will leave for Murzuq on the 13th (Mon).
more less

Things to do in Awjilah 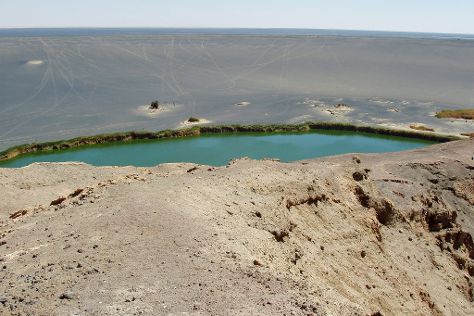 ©
Waw an Namus has been added to your itinerary.

To see more things to do, photos, ratings, and more tourist information, use the Murzuq visit planner.

Traveling by combination of car and flight from Awjilah to Murzuq takes 9.5 hours. Alternatively, you can drive. You'll set off for Ghat on the 16th (Thu).
more less

Things to do in Murzuq

©
Ghat is known for parks and historic sites. Your plan includes some of its best attractions: tour the pleasant surroundings at Akakus Desert and steep yourself in history at Cave Art of Acacus.

For maps, other places to visit, where to stay, and more tourist information, refer to the Ghat trip planning site.

You can drive from Murzuq to Ghat in 8 hours. In April, daily temperatures in Ghat can reach 82°F, while at night they dip to 75°F. On the 19th (Sun), you're off to Ghadamis.
more less

Things to do in Ghat 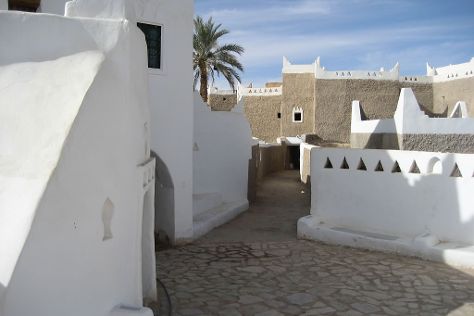 ©
Ghadames or Ghadamis is an oasis Berber town in the Nalut District of the Tripolitania region in northwestern Libya.The indigenous language of Ghadames is Ghadamès, a Berber language.Ghadamès, known as 'the pearl of the desert', stands in an oasis. Ghadamis is known for historic sites. Your plan includes some of its best attractions: contemplate the long history of Ghadames City.

To see more things to do, reviews, photos, and tourist information, refer to the Ghadamis driving holiday planner.

Drive from Ghat to Ghadamis in 17 hours. Alternatively, you can do a combination of car and flight. In April, daily temperatures in Ghadamis can reach 79°F, while at night they dip to 77°F. On the 25th (Sat), you'll travel to Sabratah.
more less

Things to do in Ghadamis 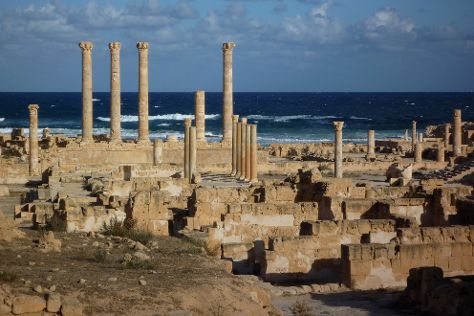 ©
Sabratha, Sabratah or Siburata, in the Zawiya District of Libya, was the westernmost of the ancient "three cities" of Roman Tripolis. Sabratah is known for historic sites. Your plan includes some of its best attractions: steep yourself in history at Roman Sabratha.

For where to stay, photos, more things to do, and more tourist information, use the Sabratah journey planner.

You can drive from Ghadamis to Sabratah in 8.5 hours. Plan for colder nights when traveling from Ghadamis in April since evenings lows in Sabratah dip to 55°F. On the 29th (Wed), you're off to Tripoli.
more less

Things to do in Sabratah 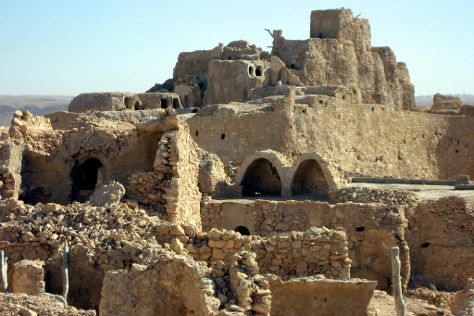 Mermaid of the Mediterranean

The "Mermaid of the Mediterranean," Libyan capital Tripoli exudes a mix of Mediterranean charm and Arabic-Islamic cultural sensibility.

Your day-by-day itinerary now includes June 11 Stadium as well as Tripoli's Medina. Deepen your sense of the past at sights like Nalut ruins and Al-Majidya Mosque. Get some cultural insight at Gurgi Mosque and Sidi Abdul Wahab Mosque. Change things up with a short trip to Al Hamadah in Jabal al Gharbi District (about 1h 45 min away). There's much more to do: ponder the world of politics at Tripoli's Red Castle (Assai al-Hamra), hunt for treasures at Fish Market, don't miss a visit to Martyrs' Square, and get a taste of the local shopping with Pottery Stalls of Gharyan.

For where to stay, other places to visit, traveler tips, and tourist information, read Tripoli trip itinerary builder website.

You can drive from Sabratah to Tripoli in 1.5 hours. While traveling from Sabratah, expect slightly colder days and about the same nights in Tripoli, ranging from highs of 74°F to lows of 60°F. On the 4th (Mon), you'll travel back home.
more less

Things to do in Tripoli

Al Hamadah, Nalut ruins
Find places to stay Apr 29 — May 4:
Hotels on TripAdvisor
Homes on Airbnb
Highlights from your plan