Crete's largest city, Heraklion remains best known for its proximity to a sprawling Bronze Age archaeological site, once the center of a vanished Minoan civilization.

Kick off your visit on the 6th (Sun): take an in-depth tour of Ιστορικό Μουσείο Κρήτης - Historical Museum of Crete, look for gifts at Eli's Ceramic Art, then get engrossed in the history at Heraklion Archaeological Museum, and finally explore the ancient world of The Palace of Knossos. On the 7th (Mon), you'll have a packed day of sightseeing: pause for some serene contemplation at Church of Saint Titus, get up close and personal with brilliant marine life at Cretaquarium - Thalassocosmos, then delve into the distant past at Malia Minoan Palace, and finally enjoy the sand and surf at Stalis Beach.

To plan Heraklion vacation without wasting time, ask Inspirock to design an itinerary.

Curitiba, Brazil to Heraklion is an approximately 24- hour combination of flight and car. The time zone changes from Brasilia Standard Time (BRT) to Eastern European Standard Time (EET), which is usually a 5 hour difference. When traveling from Curitiba in August, plan for somewhat warmer days and warmer nights in Heraklion: temperatures range from 34°C by day to 26°C at night. Wrap up your sightseeing on the 8th (Tue) early enough to take a shuttle to Rethymnon.
more less

Things to do in Heraklion

©
The Palace of Knossos 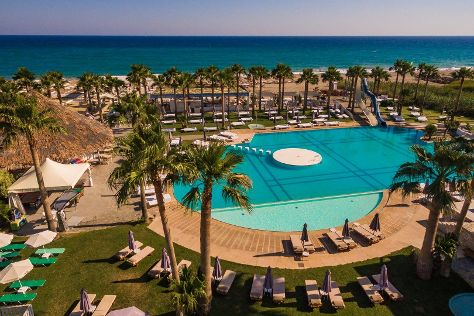 Rethymnon combines the old-fashioned charm of a small town with proximity to long sandy beaches with all the modern conveniences usually found in big tourist resorts.

Start off your visit on the 8th (Tue): enjoy the sand and surf at Baja Beach Club, explore the activities along Lake Kournas, then steep yourself in history at The Venetian Fortezza, and finally visit Rethymnon Old Town.

You can take a shuttle from Heraklion to Rethymnon in an hour. Other options are to drive; or take a bus. In August, daytime highs in Rethymnon are 36°C, while nighttime lows are 26°C. Finish up your sightseeing early on the 9th (Wed) so you can travel to Fira.
more less

Things to do in Rethymnon

Fira, the busy capital of Santorini, sits on the very edge of a volcanic caldera.

Popular historic sites such as Akrotiri and Ekklisia Panagia Platsani are in your itinerary. You'll get in some beach time at Kamari Beach and Red Beach. Take a break from Fira with a short trip to Perivolos in Perivolos, about 30 minutes away. And it doesn't end there: tour the pleasant surroundings at Perissa Black Sand Beach, steep yourself in history at Ancient Thera, learn about winemaking at Santo Winery, and don't miss a visit to Sunset in Oia.

For reviews, where to stay, ratings, and tourist information, you can read our Fira online route builder.

Traveling by combination of taxi and ferry from Rethymnon to Fira takes 3 hours. Alternatively, you can do a combination of bus and ferry; or do a combination of shuttle and flight. August in Fira sees daily highs of 36°C and lows of 28°C at night. Wrap up your sightseeing on the 12th (Sat) to allow time to ride a ferry to Mykonos Town.
more less

Things to do in Fira

A holiday in Mykonos Town offers a chance to relax on picturesque beaches and explore a labyrinth of charming streets lined with traditional white houses.

Your itinerary includes some good beach time at Panormos Beach and Ornos Beach. The adventure continues: wander the streets of Little Venice, stroll through Paraga Beach, kick back and relax at Platis Gialos Beach, and don't miss a visit to The Windmills (Kato Milli).

To find where to stay, photos, and other tourist information, go to the Mykonos Town travel planner.

Traveling by ferry from Fira to Mykonos Town takes 2 hours. Alternatively, you can fly. In August, daily temperatures in Mykonos Town can reach 33°C, while at night they dip to 27°C. Wrap up your sightseeing on the 15th (Tue) to allow time to travel to Athens.
more less

Things to do in Mykonos Town

The Birthplace of Democracy

One of the world's most ancient cities, Athens remains Europe's undisputed historical and cultural capital.

Get some historical perspective at Acropolis of Athens and Temple of Hephaestus. Do some cultural sightseeing at Acropolis Museum and Plaka. And it doesn't end there: admire the striking features of Parthenon, explore the world behind art at Benaki Museum, delve into the distant past at Ancient Agora of Athens, and take an in-depth tour of National Archaeological Museum.

To find other places to visit, more things to do, reviews, and tourist information, go to the Athens itinerary maker app.

You can do a combination of flight and subway from Mykonos Town to Athens in 2.5 hours. Other options are to ride a ferry; or do a combination of ferry, taxi, and flight. Traveling from Mykonos Town in August, expect nights in Athens to be about the same, around 29°C, while days are a bit warmer, around 39°C. On the 20th (Sun), wrap the sightseeing up by early afternoon so you can travel to Istanbul.
more less

Things to do in Athens

A physical and cultural bridge between Europe and Asia, the transcontinental city of Istanbul serves as a living reminder of the Roman, Byzantine, and Ottoman empires.

On the 21st (Mon), take in the spiritual surroundings of Sultan Ahmed Mosque, kick back and relax at Dalia Beach, then contemplate the long history of Historic Areas of Istanbul, and finally take an in-depth tour of Hagia Sophia Museum. On the next day, enjoy breathtaking views from Galata Tower, get engrossed in the history at Topkapi Palace, then admire the striking features of Basilica Cistern, and finally get to know the fascinating history of Sultanahmet District.

Discover how to plan a Istanbul trip in just a few steps with Inspirock's itinerary builder.

Getting from Athens to Istanbul by flight takes about 5 hours. Other options: do a combination of flight and shuttle; or drive. Due to the time zone difference, you'll lose 1 hour traveling from Athens to Istanbul. In August, Istanbul is little chillier than Athens - with highs of 34°C and lows of 25°C. Wrap up your sightseeing by early afternoon on the 23rd (Wed) to allow time for travel back home.
more less

Things to do in Istanbul