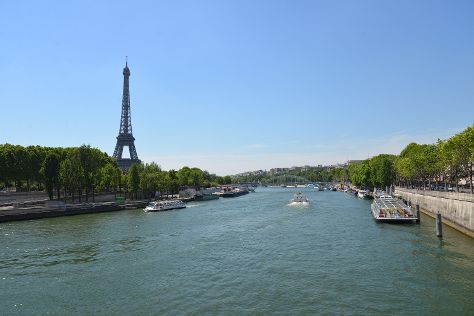 Palace of Versailles has been added to your itinerary. Step out of the city life by going to Seine River and Loc’C Lib. You'll explore the less-touristy side of things at Paris Plage and Les Cyclos du Loing.

Fargo, USA to Paris is an approximately 21.5-hour flight. The time zone changes from Central Standard Time (CST) to Central European Standard Time (CET), which is usually a 7 hour difference. July in Paris sees daily highs of 79°F and lows of 60°F at night. Cap off your sightseeing on the 19th (Wed) early enough to travel to Naples.
more less

©
Naples is the capital of the Italian region Campania and the third-largest municipality in Italy after Rome and Milan. Kick off your visit on the 20th (Thu): see the interesting displays at Museo Archeologico Nazionale di Napoli, kick back and relax at Bagno Elena, and then make a trip to Spaccanapoli. On the 21st (Fri), you'll have a packed day of sightseeing: learn about all things military at Galleria Borbonica, thentake in the architecture and atmosphere at Cloister of Santa Chiara, thentake in the awesome beauty at Vesuvio National Park, and finally delve into the distant past at Pompeii Archaeological Park.

To see where to stay, ratings, other places to visit, and more tourist information, read Naples trip planner.

You can fly from Paris to Naples in 5.5 hours. Alternatively, you can take a train; or drive. Plan for somewhat warmer temperatures traveling from Paris in July, with highs in Naples at 87°F and lows at 70°F. Finish your sightseeing early on the 21st (Fri) to allow enough time to take a train to Rome.
more less 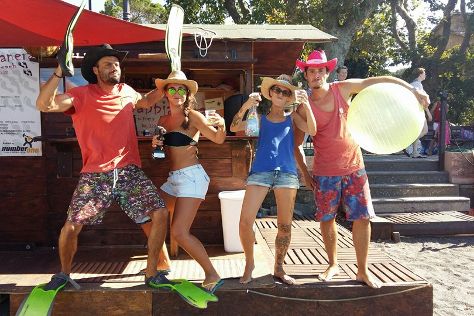 Discover out-of-the-way places like Moai Beach and Sabbianera Super Beach. Get in touch with nature at Lido La Playa and La Capannina Lavinio. Step out of Rome with an excursion to Lido di Enea in Latina--about 1h 20 min away.

To find other places to visit, photos, ratings, and tourist information, use the Rome tour itinerary tool.

Traveling by train from Naples to Rome takes 2 hours. Alternatively, you can drive; or take a bus. In July, daily temperatures in Rome can reach 89°F, while at night they dip to 70°F. Wrap up your sightseeing on the 24th (Mon) to allow time to travel to Venice.
more less

Do some cultural sightseeing at Dorsoduro and Cannaregio. Explore hidden gems such as Blue Moon and Bagni Alberoni. When in Venice, make a side trip to see Bagni Perla in Chioggia, approximately Chioggia away. There's more to do: don't miss a visit to Piazza San Marco and take in the views from Ponte di Rialto.

To find where to stay, other places to visit, reviews, and other tourist information, refer to the Venice online trip itinerary builder.

Traveling by flight from Rome to Venice takes 3.5 hours. Alternatively, you can take a train; or drive. In July, daily temperatures in Venice can reach 87°F, while at night they dip to 67°F. Wrap up your sightseeing by early afternoon on the 27th (Thu) to allow time for travel to Berlin.
more less

On the 28th (Fri), enjoy the sand and surf at Strandbad Tegeler See, thenobserve the fascinating underwater world at Zoo Berlin, and then visit Savignyplatz. On the 29th (Sat), you'll have a packed day of sightseeing: explore the world behind art at Pergamonmuseum and then contemplate the long history of Memorial of the Berlin Wall.

To see reviews, other places to visit, traveler tips, and tourist information, refer to the Berlin online vacation planner.

Traveling by flight from Venice to Berlin takes 4.5 hours. Alternatively, you can drive; or take a train. Wrap up your sightseeing by early afternoon on the 29th (Sat) to allow enough time to travel to Paris.
more less

©
Memorial of the Berlin Wall

On the 30th (Sun), enjoy the sand and surf at Paris Plage, thenwander the streets of Montmartre, and then explore the activities along Seine River.

To see more things to do, photos, maps, and tourist information, you can read our Paris trip planner.

Traveling by flight from Berlin to Paris takes 5 hours. Alternatively, you can take a train; or drive. Wrap up your sightseeing on the 30th (Sun) to allow time to travel back home.
more less