Satisfy your inner culture vulture at Sacromonte and Monasterio Cartuja. Step off the beaten path and head to Río Chíllar and Plaza de San Nicolas. Next up on the itinerary: take in the architecture and atmosphere at Basílica de San Juan de Dios, contemplate the long history of La Madraza, admire the landmark architecture of Palace of Carlos V, and appreciate the extensive heritage of Mirador de San Nicolas.

To find photos, reviews, ratings, and tourist information, use the Granada travel planner.

London, UK to Granada is an approximately 6.5-hour flight. You can also take a train; or drive. Traveling from London to Granada, you'll lose 1 hour due to the time zone difference. Traveling from London in July, you will find days in Granada are much warmer (41°C), and nights are somewhat warmer (22°C). Finish your sightseeing early on the 26th (Wed) to allow enough time to drive to Cordoba.
more less 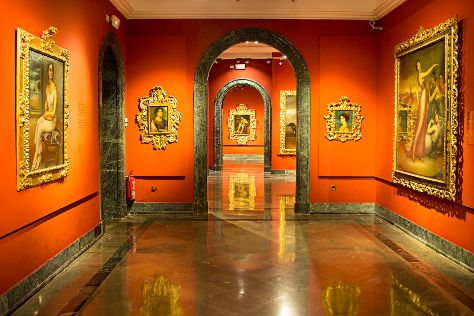 You'll discover tucked-away gems like Palacio de Viana and Calahorra Tower. Popular historic sites such as Calleja de las Flores and Castillo de Almodovar del Rio are in your itinerary. Next up on the itinerary: pause for some serene contemplation at Capilla Mudejar de San Bartolome, steep yourself in history at La Casa Andalusí, relax and rejuvenate at some of the top local wellness centers, and head outdoors with Visual Axes.

For traveler tips, reviews, photos, and other tourist information, you can read our Cordoba itinerary builder.

You can drive from Granada to Cordoba in 2.5 hours. Other options are to take a train; or take a bus. July in Cordoba sees daily highs of 43°C and lows of 22°C at night. Finish your sightseeing early on the 1st (Tue) to allow enough time to travel back home.
more less